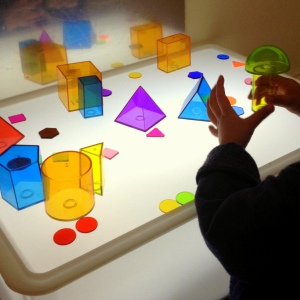 Recommended for children age 12 months and over.

Alex has been very confident in recognising most of 2D shapes, so, I wanted to extend his interest by introducing him to some 3D shapes.

It is an invitation to play by introducing different types of translucent geometrics shapes using a Lightbox. We’re using a DIY Lightbox described here. We also use mirrors not only on the walls to provide another point of view and introduce the concept of depth When Alex builds things with these shapes, he is also experimenting with the different colours, shapes and patterns.

In the beginning, I work alongside him. While he builds, he sometimes asks, “What’s this?” and I let him know the actual names such as Hemisphere, Cube and so on. After a while playing at that table, he says, “This is a small cube and this is a big cube!” . He says “I made Ice Cream, mum! Green Ice Cream” by putting the cone with hemisphere together.

He was also curious to discover what can he do with the 3D shapes, did some trial and error of which shapes would spin and others that wouldn’t. He is free to explore, comparing shapes sizes and colours.